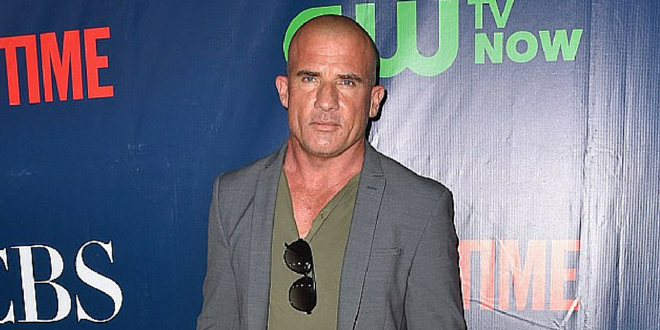 Dominic Purcell is warning his fans and followers to cover up after a skin cancer scare.

The Prison Break star took to social media on Wednesday to share a rather shocking image of his bandaged face after receiving treatment.

Urging others to be aware of the common cancer he wrote: “Take my lead. COVER UP PEOPLE.”

Dominic is seen wearing a large black hat in the snap shared to Instagram which he says is “#doctors orders.”

“The big #cowboyhat hopefully protects my ears back of neck from future potential #skincancer,” he wrote.

His words are reminiscent of fellow Australian actor Hugh Jackman after the Wolverine star was treated for four skin cancers in the past two years.

Hugh is required to have his skin checked every three months after Basal Cell Carcinomas were first discovered on his nose in November 2013.

He was encouraged to go and have the mark on his nose checked after his makeup artist noticed a little spot of blood while he was filming X Men: Days of Future.

At the time he wrote on social media: “Please don’t be foolish like me. Get yourself checked. And USE sunscreen!!!”

BCC is a common form of skin cancer and treatable, according to the Skin Cancer Foundation.

They recommend staying largely out of the sun during the hottest parts of the day, using sunscreen, wearing clothing, headwear and UV blocking sunglasses while outdoors and having regular check-ups to help prevent skin cancer.