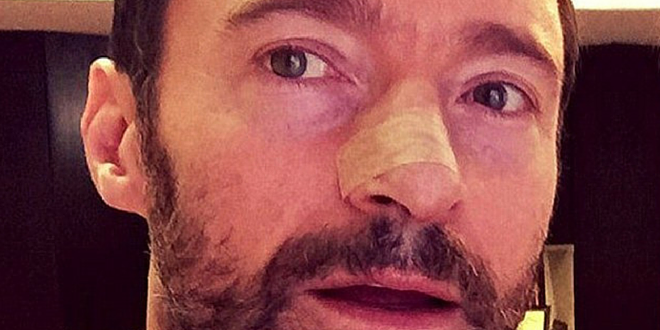 He’s been open in the past about his skin cancer procedures and on Monday Hugh Jackman revealed he’s had yet another growth removed from his nose.

The Australian actor, 47, shared a selfie on Instagram showing a large Band Aid stuck right across the bridge of his nose. “An example of what happens when you don’t wear sunscreen. Basal Cell. The mildest form of cancer but serious, nonetheless,” he wrote alongside the photo. “PLEASE USE SUNSCREEN and get regular check-ups.”

It’s the fifth time in two years that the Wolverine star has had a basal cell growth removed from his face.

Last May, he revealed he’d had four skin cancers in 18 months and his doctor had warned him he would likely have more in the future. Just eight months after his fourth procedure, the medical prediction has proved to be well-founded.

The 47-year-old first revealed he had some cancerous cells removed in November 2013.

The first time was after a makeup artist noticed a little spot of blood on his nose while he was filming X Men: Days of Future Past and his wife Deborra-Lee Furness, 60, also urged him to get it checked out.

Hugh said the second time around he thought he just had a dark freckle but that, too, turned out to be cancerous. The third cancer was found after he noticed blood on his nose again.

The actor gets his skin checked every three months and during an interview to promote the 2014 X-Men movie, he said: “I’m realistic about the future and it’s more than likely that I’ll have at least one more but probably many more, which is not uncommon for an Aussie particularly from English stock growing up in Australia where I don’t remember ever being told to put sunscreen on.”

He added that he is trying hard to stay positive about his health.

“The beauty of this is it’s all preventable. It’s just about getting proper check-ups,” he said. “I can be a typical man, I couldn’t be bothered, and now I’m not lazy at all.”

It’s a slow growing cancer and rarely spreads to other parts of the body.

The ACF states that about half of those diagnosed with a basal cell skin cancer will develop a new skin cancer within five years. It develops on areas of the skin that are exposed to the sun, mainly on the face and neck.

Original title: Hugh Jackman has FIFTH skin cancer in two years removed from his nose… and urges fans to use sunscreen and get check-ups