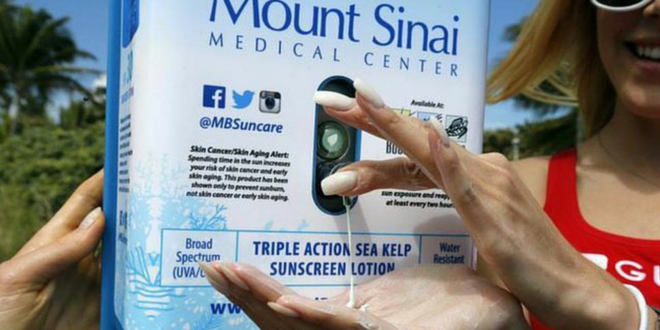 Posted by: All Things Tanning March 13, 2015 Leave a comment

Article by Joey Flechas for the Miami Herald | www.miamiherald.com

Sun-kissed beachgoers will now be able to protect themselves from skin cancer for free on Miami Beach.

With sponsorships from Mount Sinai Medical Center and Destination Brands, 50 dispensers to distribute sunscreen lotion will be installed at various Miami Beach public pools, parks and beach access points near lifeguard stands. The sunscreen is free for anyone visiting the Beach.

Rachel Gerber, of New York City, applies sunscreen from a dispenser at 21st Street on Miami Beach, Friday, March 13, 2015. The City of Miami Beach is installing 50 sunscreen dispensers throughout the city for public use. The sunscreen dispensers will be placed at public pools, parks and various beach access points near lifeguard stands for all who visit Miami Beach to use, free of charge. And of course, the sunscreen being provided in the dispensers is none other than MB Miami Beach Triple Action Sea Kelp Sunscreen Lotion. (Charles Trainor Jr / Miami Herald Staff)

Dr. Jose Lutzky, head of the melanoma program out Mount Sinai, said Florida is second behind California in incidence of melanoma. But the trend is going in the wrong direction.

“Unfortunately, our numbers are growing,” he said. “That is really something we do not want to be first in.”

According to the American Cancer Society, skin cancer is the most common of all cancers. More than 3.5 million cases of basal and squamous cell skin cancer are diagnosed in the United States each year. Melanoma, the most serious type of skin cancer, will account for more than 73,000 cases of skin cancer in 2015.

Mount Sinai has invested $25,000 to support the effort, funding the dispensers. Visitors can expect to see stands being installed throughout the city during the next few weeks. On the sand, the dispensers will be along the dune line near lifeguard stands.

“We have the honor and the pleasure of unveiling our birthday gift to the city,” said Mount Sinai CEO Steve Sonenreich at a ceremony Friday at the 21st Street entrance to the beach.

VIDEO: Sun-kissed beach goers will now be able to protect themselves from skin cancer for free on Miami Beach. Fifty dispensers to distribute sunscreen lotion will be installed at various Miami Beach public pools, parks and beach access points near lifeguard stands. The sunscreen is free for anyone visiting the Beach. (Video by Charles Trainor Jr / Miami Herald Staff)

The city partnered with Destination Brands to release an official suncare line last year in a move to capitalize on the Miami Beach brand and commemorate the city’s upcoming centennial. The products are available in retail shops across the Beach and even in some markets abroad, according to Max Sklar, director of the Beach’s tourism, culture and economic development department.

“It’s an opportunity for us to increase our brand awareness and generate some revenue,” Sklar said.

He said that according to the agreement between Destination Brands and the city, Miami Beach will begin to get a percentage of the sales revenue from this year.

Sales of the sunscreen are helping to provide the free squirts at the Beach.

“We could not have done this without the support of everyone who buys MB Miami Beach sunscreen,” said Desiree Rodriguez, vice president of sales and marketing for Destination Brands. “Through the portion of proceeds that go towards skin protection education, the MB Foundation [founded by Destination Brands] is able to fund the free sunscreen being offered in the dispensers.”

Previous: Making Page Likes More Meaningful
Next: How To Use The New SunSmart App And Widget