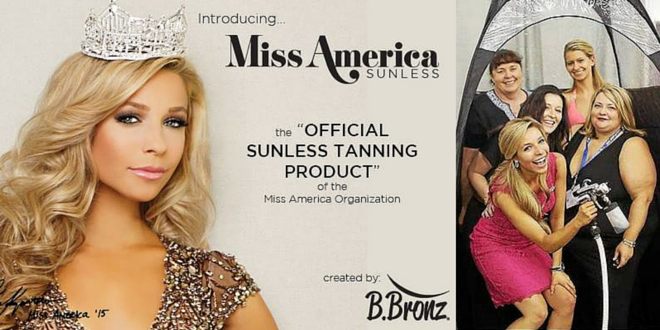 Article by David Foster for The Trentonian | www.trentonian.com

B.Bronz, which is owned by alleged con artist Kelly Richardson, will be suspended until the investigation is complete.

Miss America, however, still lists B.Bronz as a sponsor on its home page and links to the company’s website, which has the capabilities of retaining personal and credit card information.

On Friday’s cover story, The Trentonian reported Richardson, a convicted felon, solicited salon owners to participate in spray tanning activities in Atlantic City this week for the pageant. Many of the women allegedly gave Richardson money to attend, but were canceled upon last minute and not given refunds. Some of the women who showed up in Atlantic City to be a part of the spray team, coming from as far away as Canada, were turned away and Richardson refused to see them.

According to emails obtained by The Trentonian, the women began contacting Miss America about Richardson’s shifty ways on Sept. 5.

One response from a Miss America executive on Monday stated, “Due to us being in the height of our pageant, I may not have a response till next week.”

The women, who have banded together and started to file police reports against Richardson, estimate that there is at least a dozen victims. The combined money allegedly stolen so far totals more than $10,000.

And after the story was published, the list of alleged victims continues to grow.

MORE ON THIS STORY

The Trentonian | September 19, 2015
Miss America spray tan sponsor charged in April for selling without a permit

Previous How Do Rapid Tans Work?
Next 4DHD Spray Tans