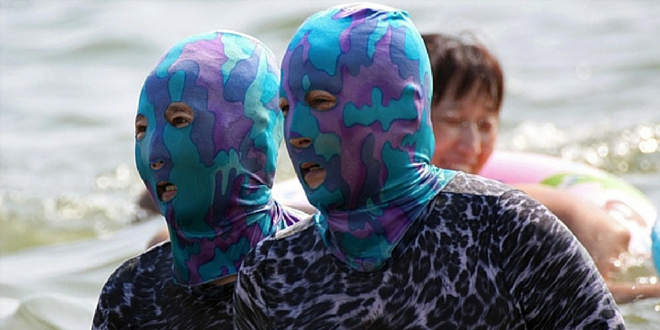 The Facekini – Have You Got Yours?

Article by All Things Tanning

The Facekini is a ski mask designed for swimmers and beachgoers which covers the head, and reveals only the eyes, nose, and mouth.

This mask was first made popular in the Chinese city of Qingdao in 2012, where it was used by people for protecting themselves from UV Rays while tanning, and also from jellyfish while at the beach. Now their popularity has spread as the latest accessory for extended sun exposure protection during Summer activities in China.

The mask is made of a stretchy fabric that is commonly used in bathing suits, and comes in different colours and patterns. It is often worn with an accompanying body suit with long sleeves, and even gloves.

Facekinis are now under mass production in China and are available in local swim stores near beaches, and many online stores.

There is also a deeper explanation for this unusual craze as well as UV Ray and jellyfish protection. Women in Asian regions generally avoid developing a tan (particularly in the face) as it is often seen as a sign of peasantry. On the flipside, fairer skin is seen as a sign of beauty remaining unmarked by physical labour.

“I myself don’t mind getting tanned, but I can see why pale skin is attractive,” Alina Zhao, a college student in the U.S. who grew up in Zhejiang, China, said. “It definitely has to do with the history of China, which is largely an agricultural society,” she added. “Getting tanned means you work outside in the fields a lot, so skin colour is like an indicator of your social status. The fairer you are, the wealthier or more respected you seem.”

In fact, Facekini is only one out of many attempts by Chinese people to stay fair. The number of umbrellas to be seen in Chinese cities on a hot, sunny day might appear bizarre to many non-Chinese people.

You can find the latest range of Facekinis at swimwear shops in China for around $3 each. We found them on eBay and various other online stores for around $9 – $15.

Australia has the highest incidence of melanoma in the world, whilst China has some of the lowest rates of skin cancer.

So… Will you be wearing a Facekini this Summer? 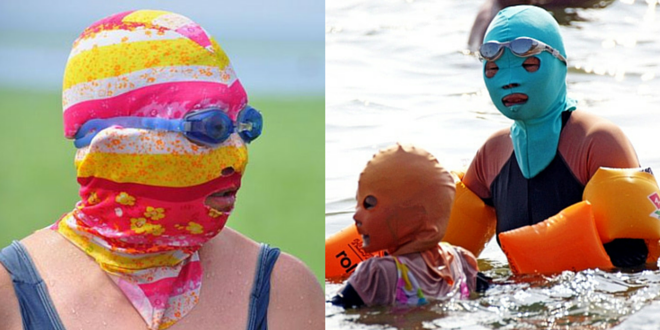