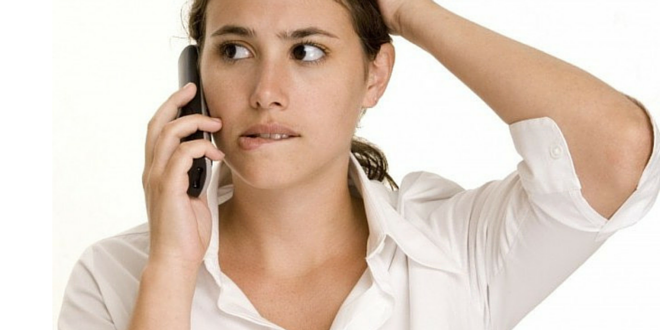 Article by Kim Van Tussenbroek from Colour Me Bronze | www.colourmebronze.com.au

I just wanted to share a story with you all about an incident that happened to me that has just ended (fingers crossed) with a successful nuisance call claim and the perpetrator being sent a warning letter by their Telco to stop calling me.

It started before Christmas with a man calling wanting to book an appointment with what I instantly knew was a fake accent. He called from a Private number as well which was a huge warning sign for me.

He wanted to book in a spray tan, and after some discussion I told him that I would need to get some details from him to confirm the booking including his name, mobile number and email address. After a small debate about giving those details to me he hung up on me.

I then put up a statement on my Facebook page about it, just warning people not to take bookings from people who do not give all the necessary information.

Two days later I received a phone message (the person had tried calling about 6 times in a row from a private number early in the morning but I was asleep and had my phone on silent so didn’t hear the calls). He then left a message saying (using his fake accent), that he had seen my posts on the “Book of Faces” and that I should be posting up pictures of me in a bikini, that they want to see pictures of me in a bikini on the “Book of Faces”.

Unfortunately my posts on Facebook are flagged as public, reason being so that they can be transferred to my Twitter account automatically, which I guess is a mistake in itself, and it means that anybody can view my posts on Facebook, even people I am not friends with, so I will be changing this as soon as possible.

I instantly recorded the phone message to my laptop and posted it up on Facebook aka “The Book of Faces” asking if any of my Facebook friends recognised the voice, as I thought this might scare off the person doing this, but no… 2 days later I got another phone message left on my phone saying that he saw what I did, and I shouldn’t be doing things like that and that I am a naughty, naughty girl.

Again, I thought, this person is not going to scare me and get the better of me, so I recorded the message and again posted it up on Facebook… firstly to see if anybody could recognise the voice, but mainly to make it an official record of it happening, and thirdly just to advise people that looked at my Facebook page in a round-about way that this was happening so if I suddenly “disappeared” people could relate it to this possible incident of calls.

I didn’t hear anything for nearly a week and I thought my troubles were over until I had a phone message on my phone from the same guy who again called from a private number at 6.15am last Sunday morning. This voice message stated that he saw me get out of my car and questioned what I had been doing as I have put on weight. This voice message is what actually worried me… thoughts went through my head as to how he saw me?, where he saw me?, do I know him?, have I met him?, asking myself was he following me?… did I have to be careful?… so I reported the incidents to Optus. I was clever with the fact that I had noted down every call/message I had received from him with the exact time of call and date and a description of the call. I gave this information to Optus who then put in a nuisance call claim to which I found out yesterday was successful. My claims matched up with the call times and from the same number (which they now have on file but I’m not allowed to know the number due to the privacy law) and the perpetrator will now get an official warning letter to stop calling me from their Telco company otherwise further action will be taken.

The aim of this story was to give you a rundown of what happened and to warn you all that this caller or others similar could do the same to you, but to also make sure that everybody is taking down all the necessary details of people when you book them in for an appointment… which I am sure you are all doing anyway… it’s so important!

If I hadn’t have been as cautious, if I had just have taken his booking without worrying about getting all the details and given him my address details (I am currently still operating out of home until my salon is up and running in March), would he have turned up to my place, or was it totally a fabricated booking which turned into nuisance calls because of how strict I was with getting details when booking in clients?… did he just want to annoy me or did he have other intentions?… if he had turned up was he coming to actually get a spray tan or were his intentions different? If he had turned up and something nasty had happened and I didn’t have his proper details I had no proof of who he was or any contact details so we would have had to go through the phone records like we did to put in a claim and find out who he was…. and then prove that he was actually there.

Just wanted to warn everybody that there are actual loonies out there. No matter what environment you are working in, whether it’s a shopfront/salon or home business you still need to take precautions.