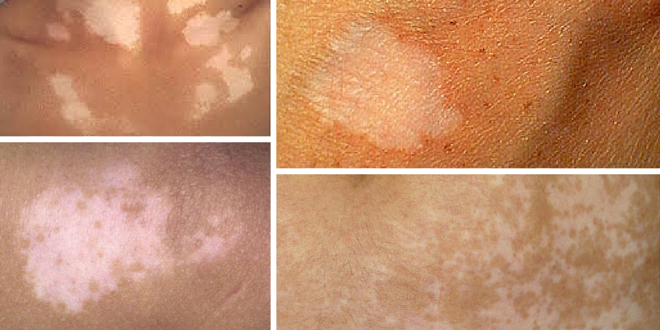 White Spots After Tanning? >>> Seek advice from your doctor before tanning again.

VITILIGO AND LOSS OF SKIN COLOR

Vitiligo (vit-uh-lie-go) is a condition in which white patches develop on the skin. Any location on the body can be affected and most people with vitiligo have white patches on many areas of the body.

Melanin is the pigment that gives the skin its characteristic color. Vitiligo is caused by a loss of pigment in the skin, due to destruction of pigment-forming cells known as melanocytes. The exact cause of the destruction of these cells is not known. One possible explanation might be that the body’s immune system destroys the cells, as in other autoimmune conditions. Although vitiligo affects all races equally, it is more noticeable in dark-skinned people.

Vitiligo affects up to 2% of the population, and it is estimated that two to five million Americans have the condition. In most cases, vitiligo develops early in life, between the ages of 10 and 30 years. Ninety-five percent of those affected will develop the disorder before age 40. Both men and women are equally likely to develop vitiligo. Vitiligo may run in families; those with a family history of vitiligo or premature graying of the hair are at increased risk for the development of vitiligo. Other risk factors that increase one’s chances of developing vitiligo include having autoimmune diseases, such as autoimmune thyroid disease (Hashimoto’s thyroiditis). 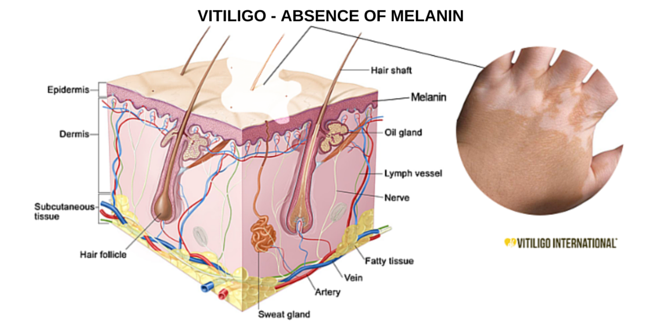 Symptoms of vitiligo include an often rapid pigment loss on several areas of the skin. The initial appearance of the white patches can be followed by a stable period without any progression of the condition. Later on, further cycles of pigment loss and stability may be observed. Vitiligo commonly affects areas on the skin that are exposed to sun, body folds (such as armpits), previous sites of injury, areas around moles, or areas around body openings. It is rare for pigment to return once the white patches have developed. Vitiligo can also affect the eyelids and hair.

Diagnosis And Treatment Of Vitiligo

Your doctor can usually make the diagnosis of vitiligo during a physical exam. There is no known way to prevent or cure vitiligo. However, several methods, including cosmetics, re-pigmentation using UV light therapy, corticosteroid creams, depigmentation of unaffected skin areas, and skin grafting, can be used to improve the appearance of skin severely affected by vitiligo.

The information contained in this article is to educate about common skin conditions. If you experience any of these symptoms, you should always seek advice from your doctor. This article is not intended to be a substitute for professional medical advice, diagnosis, or treatment, and may include information about therapies or treatment options that may not be available in your country or suitable for your condition.
Share

The Myth Of Shaving, Pores, And Spray Tanning

Peeing In The Shower

How Do Rapid Tans Work?